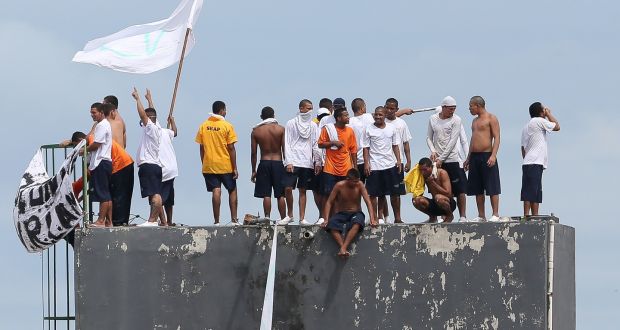 Inmates and a hostage on the top of a tower of the Puraquequara prison during a rebellion during which seven prison guards were taken hostage, in Manaus. Photograph: Michael Dantas/AFP via Getty
Veículo The Irish Times
Data 19/05/2020

For Sara, dealing with the fear provoked by the coronavirus pandemic has been particularly difficult, leaving her on anti-anxiety medication. She says she is sick with worrying about her husband, who is being held on remand in one of Brazil’s chronically overcrowded jails awaiting trial in a drugs case.

“I am terrified if Covid gets into his prison, everyone will die. Prisoners are already beginning to die elsewhere. In his last letter he said all they can do now is pray,” says Sara, who asked to withhold her real name to protect her husband.

The fear now gripping relatives of those inside Brazil’s prisons, which a justice minister once compared to “medieval dungeons”, is well founded as the system is particularly vulnerable to coronavirus, which has claimed more than 16,000 lives in the country already.

Brazil now has the third-highest number of coronavirus cases in the world, at 255,368, according to Johns Hopkins University figures.

It has space for 438,000, but Brazil’s prison system currently holds almost 775,000 inmates. This overcrowding makes it almost impossible to observe isolation protocols even as coronavirus already circulates among the population and prisoners say they are reduced to using socks as improvised face masks.

Thirty prisoners and 17 prison staff have already died of Covid-19, according to the National Justice Council, while another 1,118 staff and 830 prisoners have been infected. But with almost no testing of the prison population, there is little idea of the full extent of the problem, and penal reform campaigners warn of the potential for calamity.

“In our country there is no death penalty but with Covid-19 I fear there are going to be many dead inside the prison system,” says Railda Silva, founder of Amparar, an organisation that defends the rights of prisoners’ families.

The health of the world’s third-largest prison population has long been vulnerable to unsanitary conditions and a lack of adequate medical facilities. “Even before the pandemic a prisoner was six times more likely to die inside the system than outside because of diseases such as TB,” says Janaína Homerin of the Criminal Justice Network.

Of particular concern for campaigners is the third of the prison population being held on remand, mostly for non-violent crimes. “This is a group of men and women who are not yet considered guilty. A huge part of this group could end up being acquitted when they see a judge but now they may die of Covid-19 before then,” says sociologist Julita Lemgruber of the Centre for Studies on Public Security and Citizenship.

Sara is one of the thousands of relatives who have applied to courts to have their loved ones released until their trial. But her request was denied despite him being charged with a non-violent crime. As of last month, the federal government’s National Prison Department estimated just 30,000 prisoners had been let out of jail because they are considered at-risk from the coronavirus.

Before he quit his job last month, former justice minister Sérgio Moro warned state prison administrations about releasing prisoners because of the pandemic leading to a spike in crime.

“When you have an orientation from the top of the justice ministry it is very difficult to go against it at the state level. It carries a heavy political cost and we have to remember this is an election year,” says Homerin, referring to local elections in October, when law and order candidates can once again expect to feature prominently.

Rather than humanitarian releases, authorities have instead proposed controlling the spread of the virus inside prisons by isolating suspected cases in temporary containers, a move opposed by human rights groups as inhumane and inadequate.

Another measure already implemented is a ban on prison visits.

“When you prevent visits you create other problems,” warns Carolina Ricardo of the human rights group Instituto Sou da Paz. “Prisoners are left feeling totally abandoned and you create the risk of rebellions in the system.”

There have already been disturbances at units in three states since the pandemic started, and campaigners warn the unrest could intensify should the pandemic worsen inside the country’s jails.